Entertaining your guests and ensuring they have the best time possible at your wedding can be massive - and a great magician can really help! Owen Strickland is one of the best West Midlands Wedding Magician and really is worth a look! Take a read - and a watch - of my featured interview with Owen Strickland.

A fabulous addition to your wedding who will keep your guests entertained!

Over the years of photographing weddings, I’ve noticed the different having entertainment can have on the wedding day.

From entertaining your guests during the periods you’re away having your photographs taken, to filling the little lulls that happen before the evening gets underway, entertainment can be a great investment to ensure you and your guests have an amazing time – and your wedding is talked about for years to come!

I’ve featured a couple of musicians on the site already, but another great ‘act’ for your guest entertainment is a magician! And one of the very best – as proved again by The Wedding Industry Awards – is Owen Strickland!

I’ve known Owen for a good while now and really wanted to feature him on my series of wedding suppliers.

A great magician, who has a real gift when working with people, it’s no wonder Owen goes down so well at every event he’s part of! 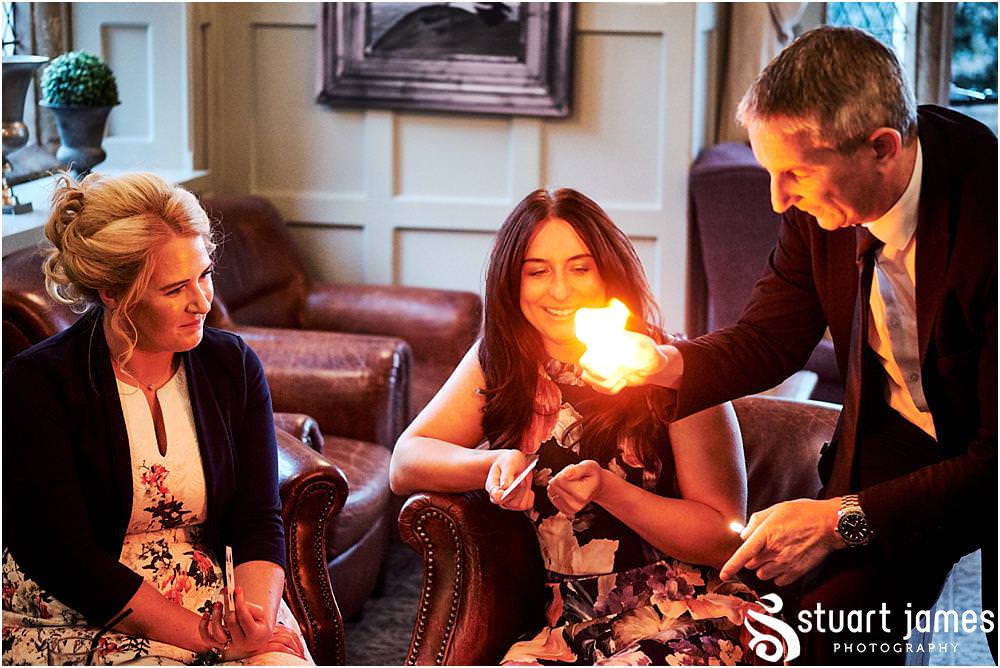 Throughout my series of featured suppliers, I’ve found it really interesting discovering where they start in their industry, and this was no different with Owen:

“Most magicians get into magic as a kid and they have the magic sets and whatever. I had none of that. I used to love watching Paul Daniels and then other magicians later on. I always thought it was some bizarre power that they had, and thought I can’t ever do magic!

I didn’t get into magic, until my late thirties. I was on a course at work and someone said to me at the bar, do you want to see something cool?

From there the interest, and fascination with magic and performing little tricks grew:

“I met a few magicians. They were like all you’re good with people. You should actually start doing some card magic. So I started doing a bit with cards and it kind of grew from there and probably six or seven years ago a couple of magicians are said come to a gig with us, we’ll get you doing a little bit, and I just I just got bitten by the bug, not knowing that it would then go and become such a big part of my life. It’s been crazy, but the best thing I ever did.”

When a ‘career’ evolves from a passion, you know you’re onto something good! 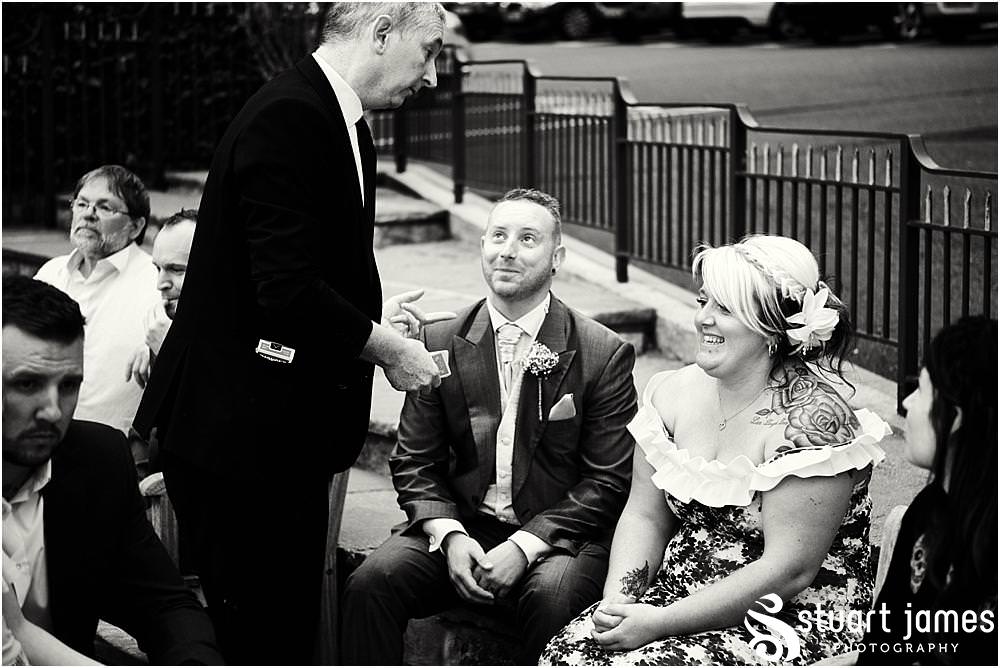 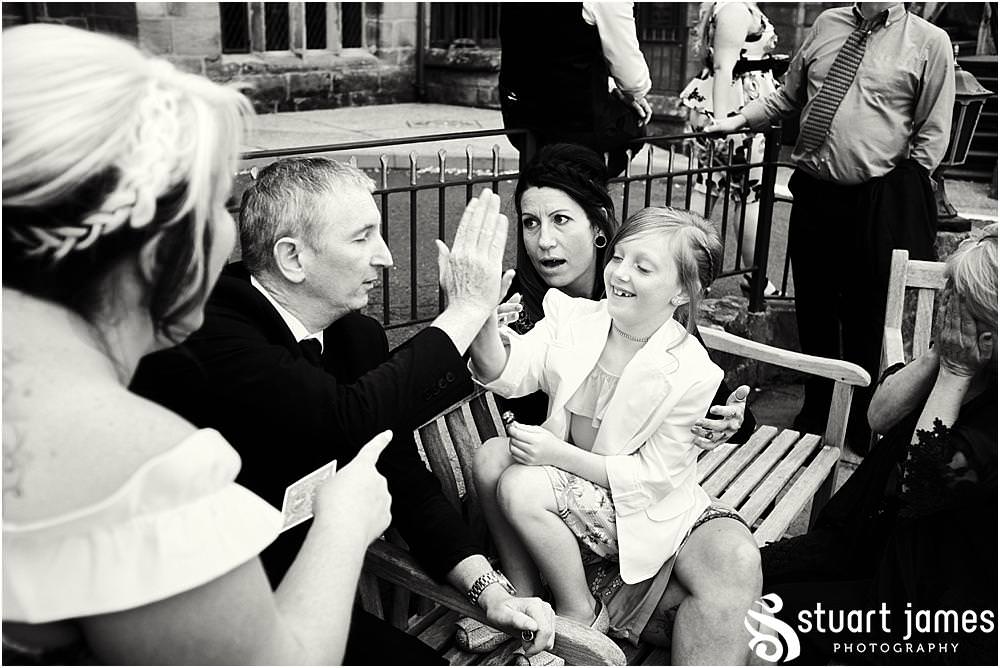 “Bringing the WOW! to your special event” – the tagline from Owen’s website and it really is so true!

However, as well as the magic itself, and entertaining your guests, it’s Owen’s approach and attitude that I think really sets him apart!

As quoted from Felicity on Owen’s Testimonials: “Owen was simply amazing. Was very flexible with timings and everyone commented how good he was. He stunned all of the guests and we can’t thank him enough for the souvenirs we gained from his tricks!”

Flexibility and understanding when you’re finding the right supplier can be so helpful and also so important – after all, each and every wedding is different!

I found it interesting when talking to Owen about how he approaches his packages for the wedding day.

“My first package is a joint package, it’s mix-and-mingle magic as soon as the ceremony is over, then I include with that table magic around the meal.

What I do which a different to a lot of magicians, is I stay until I’ve done every table. Whether that takes two hours or longer, I don’t clock watch!  It’s a big investment and although we’re adding to the experience of the day, we need to give value for money as well. So I stay there until every table’s done and within that, I do some special tricks for the bride and groom.”

The moment a magician performs the special tricks for you the couple is always a highlight – you get a personal trick, and also a fabulous little souvenir too – and I get to capture a few great expressions!

I found it wonderful to hear that Owen will also slot his coverage into whichever part of the day you’re looking for – whether it’s focussing on your day guests, or be straddling from your day guests into the early evening. Both filling the time of the late afternoon before the evening gets started, and entertaining your evening guests on their arrival too!

What a wedding magician can add to your special day

As a photographer, I love having a magician at a wedding; capturing the reactions of you and your guests as you’re amazed by the tricks, provides fabulous material for me to capture! I always love hearing the conversations and the excitement building within a crowd of people too as they all say, ‘Did you see that? How did he do it?!’ Your guests are captivated, and totally loving their time at your wedding.

I wanted to ask Owen what he believes magic adds to a wedding:

“We can help at times where the bride and groom can’t be there and certainly my most popular bookings are as soon as the ceremony is over and they go for the all-important photographs, so you’ve got the two families and a lot of them haven’t met before and sometimes I’ve been to weddings.where there’s almost a line down the middle of the room. Suddenly with the magic, they’ve got that thing that they can unite over.

Then we I go on from that, I do table magic round the meal, that way every single person at the wedding sees the magician.”

So not only adding to your day by entertaining your guests but also helping to bring everyone together too!

So whether it’s from the drinks reception through into the meal, or filling the gap into the evening, a magician really can add to your wedding! 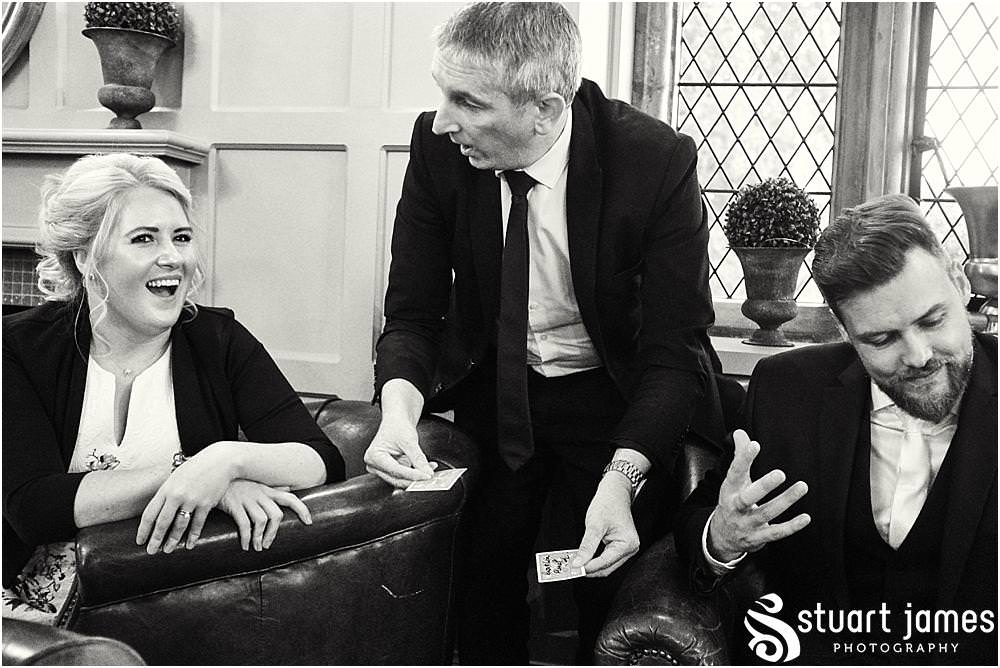 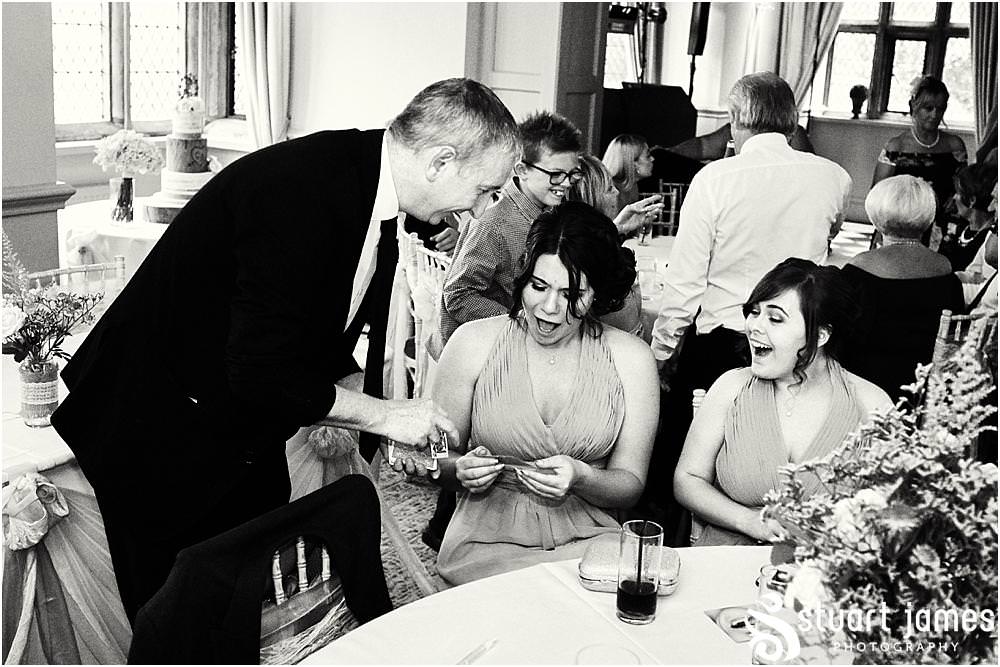 “Firstly, make time to see the act you are going to book in person. Whether that’s at a wedding fair, or a gig they are performing at. I find – particularly with magicians – they can have an amazing website but in reality they’re not very experienced in person, which can often result in poor feedback from guests afterwards.”

I agree on this one, and it’s the same with photographers! Personality speaks a lot, which is why I like to have a meeting, whether over Skype or indeed at our studio, to get to know each other, and decide whether we’re a good fit! Always put that time in – it’s worth it!

Following on from this, Owen adds:

“Once you’ve met them, start your research! What’s their online feedback like? Does it look like it’s genuine? Lots of anonymous quotes from friends does not mean they are good entertainers. I have over 250 five star reviews, and around 130 from brides and grooms who’ve voted for me in The Wedding Industry Awards. Make sure you Google the performer. If Google hasn’t heard of them, there’s probably a good reason why.”

Guarantees are everything – testimonials are great (and I the new feature I’ve brought in the last few months with interviews with past couples which you can see here!) but do your research – you only get one chance!

Owen’s final nugget of advice, “Finally – don’t always go for the cheapest option. There may be a reason why they’re cheap.” 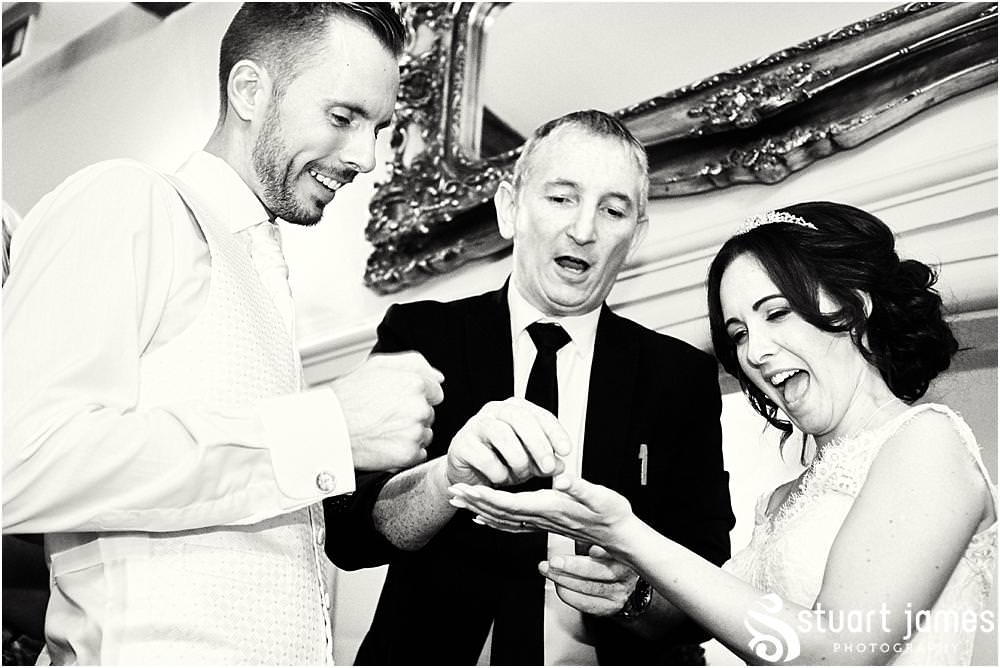 You can see the full interview with Owen here:

But if you wanted just to get a feel for whether Own could be right for you and your wedding, his showreel is below:

You can find out more about Owen on his website and social media at the following: 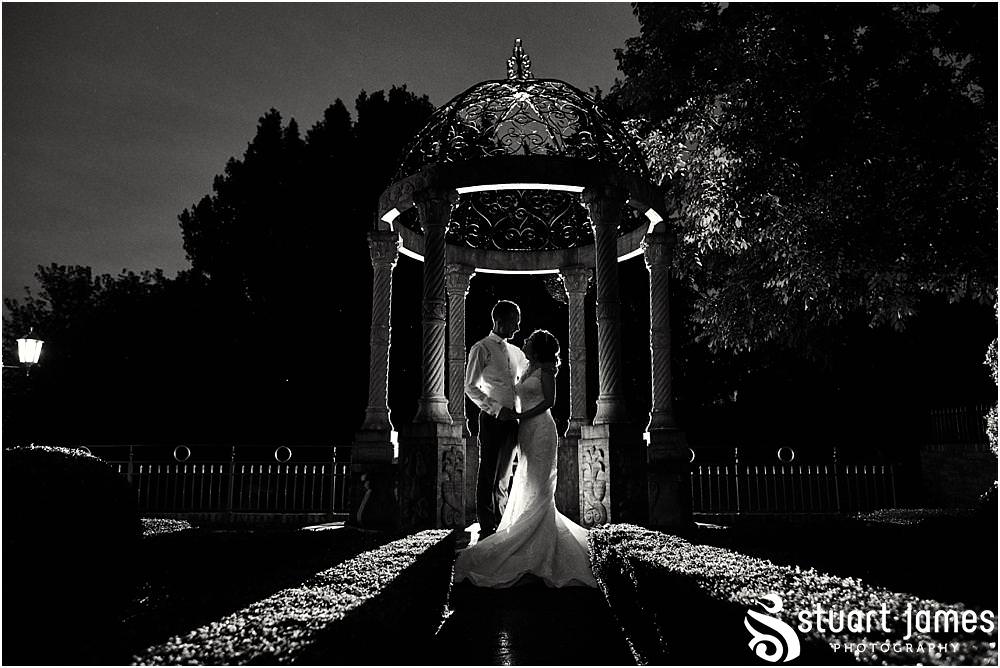 If you wanted to see more of the wedding featured in this article, Claire and Garry’s Weston Hall wedding could be seen here.